(Ticker:GLDB) Help Fight Inflation with a Gold ETF That Has Paid a Consistent 2.25% Annualized Distribution Monthly PLUS the Returns of Gold 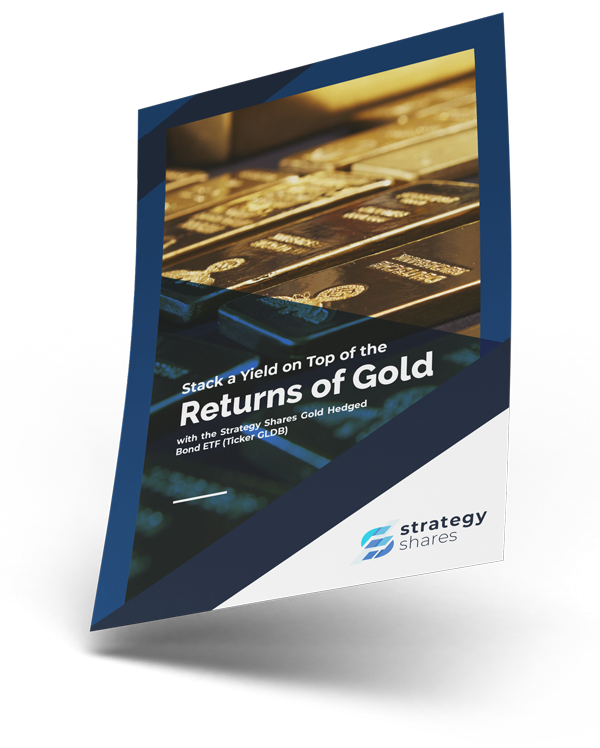 GET YOUR FREE GOLD INVESTING REPORT

Complete this form to download your free fact sheet instantly!

(Ticker:GLDB) Gold ETF Seeks to Stack a 2.25% Annualized Distribution Monthly on Top of the Returns of Gold.

GET YOUR FREE GOLD INVESTING REPORT

Complete this form to download your free fact sheet instantly!

Inflation Can Potentially Sabotage the Purchasing Power of Your Investments.

*Inflation—the rise in the price of goods and services—reduces the purchasing power each unit of currency can buy.

*Rising inflation has an insidious effect: input prices are higher, consumers can purchase fewer goods, revenues and profits decline, and the economy slows for a time until a measure of economic equilibrium is reached. Did you know that inflation can potentially derail your investment goals if you don’t hedge against it??

Strategy Shares, the Huntington, New York-based family of ETFs, recently rolled out the Strategy Shares Gold-Hedged Bond ETF (GLDB), offering investors the potential to generate income from a portfolio of investment-grade corporate bonds while hedging against inflation with a 100% gold overlay.

Traded over the Chicago Board Options Exchange (CBOE), this innovative ETF ties to the performance of the Solactive Gold-Backed Bond Index.

ANDREW BLOOMENTHAL: Let’s begin by dissecting the fundamental principles behind the Strategy Shares Gold-Hedged Bond ETF (GLDB).
DAVID MILLER: GLDB invests in a portfolio of investment-grade corporate bonds that seeks to pay out a distribution of approximately 2.25%, which seems sufficient at first glance, but is actually problematic as a stand-alone component when you consider that the Consumer Price Index1 (CPI) over the past year has increased by 7.99% since 6/30/2020, which means your real yield is effectively -5.5%. One method of solving the dilemma of inflation eating into the principal is to simultaneously invest in the one hard asset class capable of keeping pace with inflation: gold. Consequently, GLDB hedges the bond portfolio 100% to the price of gold, so its value fluctuates with gold prices rather than the bond’s principal.

AB: Did the idea for GLDB come to you suddenly, or did it develop slowly over time?
DM: Both. I’ve consistently wondered why anyone would invest in a bond portfolio if the yield’s eaten away by inflation, but this wasn’t an acute knock-you-over-the-head issue for me. But the idea kicked into high gear in March of 2020, when Minneapolis Federal Reserve Chairman Neel Kashkari went on 60 Minutes and said, “There is an infinite amount of cash in the Federal Reserve. We will do whatever we need to do to make sure there’s enough cash in the banking system.”

This comment was noteworthy because Fed chairs rarely make such blatant public statements. But in doing so, Kashkari conceptually let the cat out of the bag. Sure, we always knew in theory that the Fed could print money out of thin air, but that TV appearance made it clear it has no qualms about actually doing it. And this creates an obvious problem. Because if you have a $100 bill in your pocket, you’d justifiably think it has a certain value attached to it because there’s only a finite number of other $100 bills in the world, where your $100 bill would be divided by the $15 trillion currently in circulation. But if the Fed suddenly announces that the denominator is now infinity, you’d begin doubting the US government’s ability to guard your nest egg, which can no longer be denominated in US dollars.

Contrarily, there’s currently only enough mined gold in the world to fill three Olympic-sized swimming pools, so its supply is far from unlimited, which has been gold’s inherent value for thousands of years. So, gold is clearly the solution, in the sense that it is sound money.

AB: Can you discuss how Solactive, the German index house, created an index specifically for GLDB?
DM: Solactive created the Solactive Gold-Backed Bond Index. The concept was to replicate bonds known as “sovereign gold bonds,” which are issued by the Indian Central Bank. But people aren’t exceptionally comfortable tying their net worth up in the Indian government’s bonds because they’d much rather invest in big companies they know and trust. So, Solactive’s index replicates the concept of gold bonds but comprises investment-grade corporate bonds from well-known blue-chip companies of the world.

AB: Are you concerned about inflation leveling off?
DM: No. Because you need to understand the broad pattern of M2, which is the governmental money supply pushed into circulation. If we look back to 1960, there was approximately $312 billion in the M2 money supply. By 1970, that figure jumped to approximately $627 billion, and by August of 2000, it spiked to $4.8 trillion. Today, it’s over $20 trillion. So, overall, the money supply has been increasing on average by 3% annually. Meanwhile, the price of gold has increased roughly 550% over the last 20 years. I’m not saying gold has to grow another 550% during the next 20 years to be a worthwhile inflation hedge in a bond portfolio, but as long as gold outpaces inflation, it’s done its job. And I believe it will continue to do so because there hasn’t been a time in recent memory where the dollar outperformed gold over a long cycle.

AB: Can investors benefit from gold’s ability to maintain purchasing power?
DM: I believe so. Those people who don’t view gold as a source of capital appreciation may be surprised to learn that the price of gold grew from $283 in January of 2000 versus approximately $1800 today. Comparatively, the S&P is up just a few hundred percent for that same period. It’s an interesting observation because people think stocks had this amazing run, but in reality, they haven’t even kept pace with gold’s purchasing power.

AB: Finally, for what type of investor is GLDB ideally suited?
DM: Some may feel GLDB can most benefit retirees, middle-aged individuals, and any other investor who’s currently parking their money in cash, CDs, short-term bonds, T-bills, or commercial paper. Because even if your investment earns 3.2%, with 5% inflation, you’re effectively left with a -1.8% yield. So, GLDB is really for anybody trying to keep their money in a relatively liquid form who doesn’t want inflation potentially eating away at the principal.

1. The Consumer Price Index (CPI) is a measure that examines the weighted average of prices of a basket of consumer goods and services, such as transportation, food, and medical care. It is calculated by taking price changes for each item in the predetermined basket of goods and averaging them. Changes in the CPI are used to assess price changes associated with the cost of living. The CPI is one of the most frequently used statistics for identifying periods of inflation or deflation. It may be compared with the producer price index (PPI), which instead of considering prices paid by consumers looks at what businesses pay for inputs.

2. The S&P 500 Index, or the Standard & Poor’s 500 Index, is a market-capitalization-weighted index of the 500 largest publicly-traded companies in the U.S. It is not an exact list of the top 500 U.S. companies by market capitalization because there are other criteria to be included in the index. The index is widely regarded as the best gauge of large-cap U.S. equities.

The GLDB Investing Report will help you understand Let us show you how we can help you. Get your copy of "Strategy Shares Gold-Hedged Bond Investing Report” Today. Shares of this ETF are bought and sold at market price (not NAV) and are not individually redeemed from the ETF. Brokerage commissions will reduce returns.

Investing involves risk, including loss of principal. There is no guarantee that this, or any investment strategy, will succeed. Shares of these ETFs are bought and sold at market price (not NAV) and are not individually redeemed from the ETF. Brokerage commissions will reduce.

*Alpha: A measure of the difference between a fund’s actual returns and its expected performance, given its level of risk as measured by beta. Beta: A measure of a fund’s sensitivity to market movements.

Investments involve risk including possible loss of principal. The Fund is classified as “non-diversified” to the extent that the Index concentrates in an industry so that a relative high percentage of the Fund’s assets may be invested in a limited number of issuers. The fund invests in the underlying constituents of the index that consists of a Bond and Gold component. The Fund may also invest in more aggressive investments such as foreign and emerging market securities (which may expose the fund to currency and exchange rate fluctuations), total return swaps and futures (which may involve leverage that could increase the volatility of the Fund and reduce its returns) and derivatives which may amplify volatility. Investing in bonds are subject to credit, prepayment and interest rate risk. As interest rates rise causes a decline in the value of fixed income securities owned by the fund.

The Strategy Shares are distributed by Foreside Fund Services, LLC, which is not affiliated with Rational Advisors, Inc., or any of its affiliates.

1Solactive AG (“Solactive”) is the licensor of the Solactive Gold-Backed Bond Index (the “Index”). The financial instruments that are based on the Index are not sponsored, endorsed, promoted, or sold by Solactive in any way and Solactive makes no express or implied representation, guarantee, or assurance with regard to (a) the advisability in investing in the financial instruments; (b) the quality, accuracy and/or completeness of the Index; and/or (c) the results obtained or to be obtained by any person or entity from the use of the Index. Solactive does not guarantee the accuracy and/or the completeness of the Index and shall not have any liability for any errors or omissions with respect thereto. Notwithstanding Solactive’s obligations to its licensees, Solactive reserves the right to change the methods of calculation or publication with respect to the Index and Solactive shall not be liable for any miscalculation of or any incorrect, delayed, or interrupted publication with respect to the Index. Solactive shall not be liable for any damages, including, without limitation, any loss of profits or business, or any special, incidental, punitive, indirect, or consequential damages suffered or incurred as a result of the use (or inability to use) of the Index.